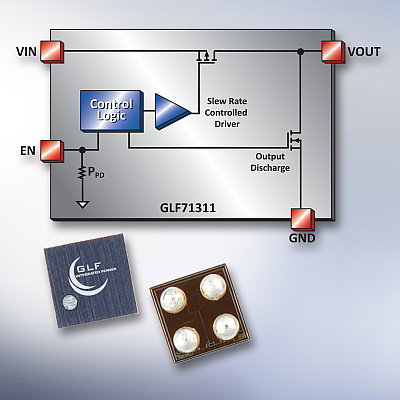 Santa Clara, CA — GLF Integrated Power, Inc., an emerging leader in efficient power switch technology, announces mass market release of the first product in its IQSmart™ line of high-performance load switches. The GLF71311 load switch offers these best-in-class features: an off-state leakage current (ISD) of 5 nA, typ., at 3.3 VIN; a logic operating current (IQ) of less than 10 nA, typ., up to 5.5 V; and an on-state resistance (RON) of 34 mΩs, max, at 5.5V and 41mΩs (max) at 3.3V. Add to this a tiny 0.97 by 0.97mm form factor, and designers now have an ultra-efficient alternative for improving power efficiency in their wearables, mobile medical devices and other battery-powered devices that is significantly better than competing load switches – and dramatically better than using discrete devices.

The GLF1311 load switch’s 5 nA off-state leakage is best in class. This is important since a load switch saves power by turning off power-hungry subsystems when not in use. To maximize efficiency, the system must be “really” off, and off-state leakage, or ISD, is a measure of just how off a system is. The lower the ISD, the less power is wasted in the off state. The GLF1311 load switch’s typical off-state leakage is up to 50 times lower than the nearest competitive load switch device. It also has half the on-state resistance and exhibits as much as 700 times lower logic operating current. These features combine to reduce both power dissipation and battery drain compared with other fully integrated load switches.

Compared to discrete FET solutions, the GLF71311 saves space by eliminating the need for external components to control inrush current slew rate. Also, its output discharge circuit keeps the load from floating when switched off. Finally, its max ISD off state leakage is up to 10 times lower than the typical max rating for a discrete FET at 25C.

“Pushing the envelope for efficiency and battery life, our new ultra-low-leakage GLF71311 offers off-state efficiency performance that is orders of magnitude better than discrete solutions,” said Eileen Ni Sun, president and founder of GLF. “This amazingly small amount of leakage is a big deal for customers trying to optimize battery life in wearables.”